When someone talks about the gentle rolling hills of Kentucky, they are not talking about Pineville Mountain Resort Park. During the first weekend in October, Pineville became the home for 58 teams of adventure racers looking to finish out their season at the 2015 United States Adventure Racing Association (USARA) National Championship race. Fighting the steep terrain and over-grown hillsides weren’t the only challenges racers had to endure. The tail end of Hurricane Joaquin provided almost two days worth of rain prior to the race, creating peanut butter-like mud on the bike trails and at times slowing progress to a crawl while bushwhacking on slippery trails.

Off-Course Navigation is still a young team and this was our first USARA Nationals.  For two of us, it was our first race longer than 12 hours. This race was by far our favorite.  Stephanie Ross, from Flying Squirrel Adventures, did an amazing job as race director and put together a race that made us think outside the box, literally. She told us at the pre-race meeting that teams would not have any transition boxes along the way. This meant carrying all necessary race gear in our packs. The race had ten transitions between three disciplines and kept the racers thinking about how to stay organized as they ran, biked, and paddled through the hills of southeast Kentucky. 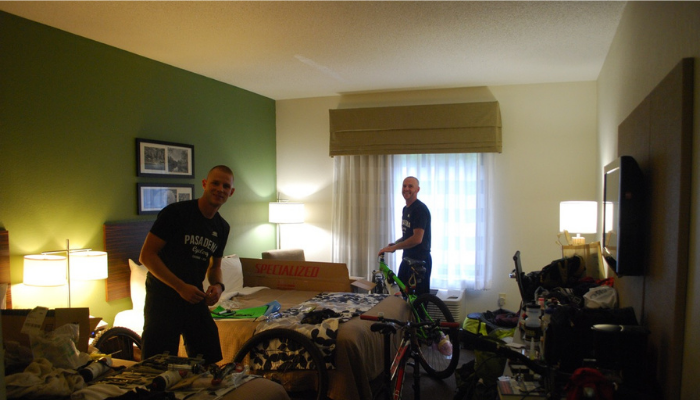 At 5:30am on Friday, teams received their maps to begin plotting out the 100+ mile course they would embark on just an hour and a half later. To keep things interesting, the race director kept the first checkpoints hidden from us. The Prologue was revealed to us at the start line and we had to quickly figure out our path to a few checkpoints before we could start the paddle leg on the river.  The Prologue was not without hiccups and we found ourselves in the back of the pack as we headed down to the river.  Undeterred, we hustled to get in our canoe and push off.  With all the rain, the river was much higher and a lot faster than normal, causing more than one team to capsize their Mad River canoes.  We found each paddling checkpoint without trouble, but noticed a couple of teams on the water struggling. They had left their boats on the side and were trekking back to pick up a checkpoint they had overshot on the way down.  We felt a little bad for them…but only a little.  After all, it is a race!

The first paddle was a time trial, as was the first bike leg and second orienteering section.  The name of the game was speed and although we were not the fastest through any of these sections, Off-Course more than held its own and found ourselves back in the thick of the field before heading out again on bikes. 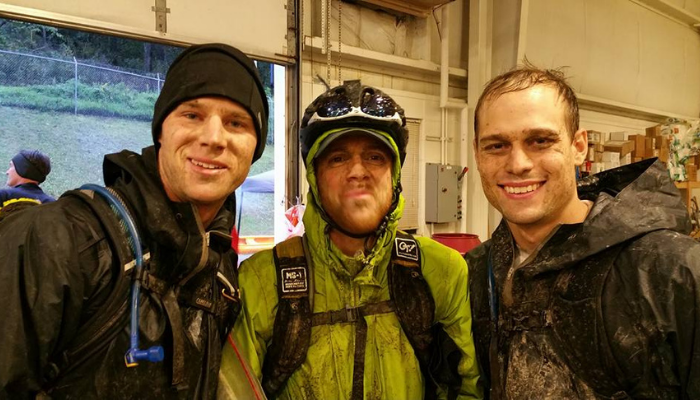 The next bike leg was made all the more difficult by the mud and rain.  Normally ride-able sections of the trail became slower “hike-a-bike” slogs as the mud wreaked havoc on our bikes.  Normally smooth and quiet, our bikes became louder and louder as the leg continued, emitting a consistent cacophony of clicks, squeaks and pings whenever we put power to the pedals. We could only hope that our competitors were having similar struggles and that we were handling them just as well, if not better.  So much of adventure racing is done without seeing your competition, which can create some paranoia or the tendency to think your competitors are having a better go than you are.  The trick is to ignore those thoughts and concentrate only on your team.  Fortunately, by the time we got to the second paddle leg, we discovered that we had moved past more than half the field in just one leg of the race. We were doing better than catching up; we were getting near the front of the pack.

The second paddle leg was on a lake.  We had pushed hard to get on the water before it got dark, hoping to make use of whatever light we had left.  Navigating at night is considerably slower than during the day and we were fortunate to get to two of the four checkpoints before the darkness was complete.  Watching the headlamps of many other teams on the water or walking the shoreline for checkpoints, we could see that they were not all as lucky as we had been.  By the time we emerged from the water again, we were in the top 20 and closing in on the top teams in our division.

With quick legs and multiple transitions, the race flew by and before we knew it dark was upon us.  Navigating at night was a new experience for our navigator Joe Harter, but with calm attention to detail and by trusting his navigation (and one or two notable instances of luck!), we smoothly finished the race with a 15-mile trek through Pine Mountain State Park. The team moved steadily through the night with out any problems finding checkpoints, but we were not without a little second-guessing while we trekked through a thick labyrinth of bushes, trees and streambeds from Checkpoint 23 to 24.  Worried that other teams were happily trekking on a free and clear trail and passing us, we pushed hard through the brush and continued on our way to clear every checkpoint on the course.  Finishing in 23 hours and 3 minutes, Off-Course Navigation finished 13th overall and first place in the Open Division. 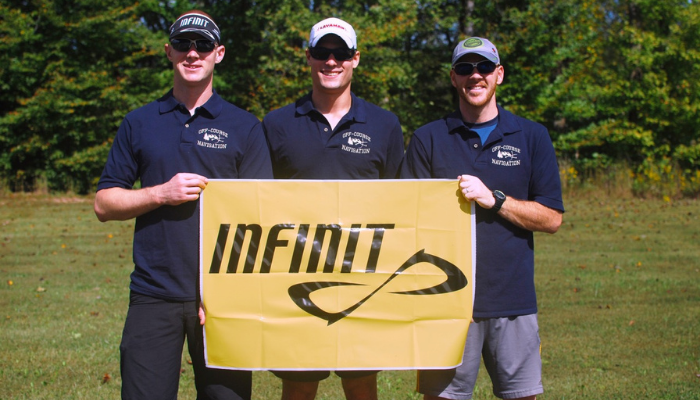 Off-Course Navigation is a southern California-based team and is very new to adventure racing. Our navigator Joe doubles as our team captain, and has been racing for two years.  The National Championship was his 7th race. Julian Capriles is in his first year of racing with Off-Course and Nationals was just his third race.  Adam Carlisle has raced twice and Cody Denton once.  With Adam and Cody unable to attend Nationals, we had to find a new teammate.  Jim Hebert reached out to us and told us that he had 10 years of experience and had raced in multiple 24-hour races and expedition races. He was a huge help to have on the team and he brought a lot of great ideas to the table for Nationals.

Adventure racing is primarily a combination of running/trekking, kayaking, and mountain biking over an unmarked course, with teams trying to find checkpoints using only a topographical map and compass.  GPS is not allowed.  Teams are unsupported for the length of the race and have to provide all of their own food, water, and gear either in a transition bin or carried with them for the duration of the race.  Winning teams are not always the absolute fastest (but it helps!), but strong navigation and a solid strategy from the start is needed. 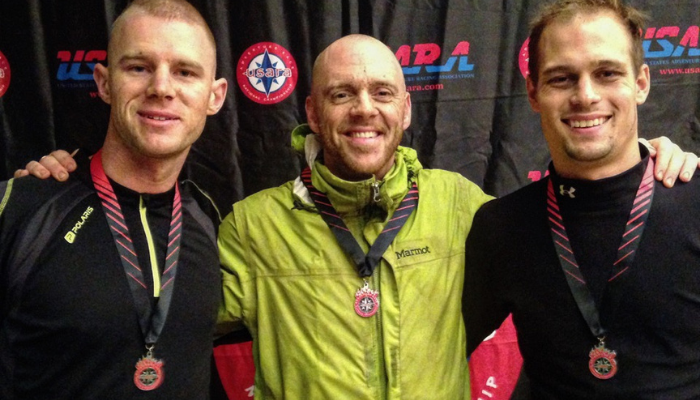 Planning what gear to bring and how much food to pack for 30 hours is difficult. Obviously the more weight you carry, the slower you move, but coming up short on calories or water for this kind of an event could be catastrophic.  Our team primarily used Infinit for our nutrition needs throughout the race.  Because we were able to take in so many calories via fluids, our team was able to focus on the task at hand instead of constantly digging through our packs to get bars and gels while trying to ride difficult terrain or bushwhack through heavy forest.

Being as cold as it was outside, we only went through about six liters of water each. Our Camelbaks were full from the start so we had to devise a way to bring enough Infinit for the whole race.  Using a water bottle, we filled it full of Infinit and minimal water, when it gelled down we added more Infinit and a splash more water. By making two concentrated water bottles we were able to refill our Camelbaks and didn't have to carry around extra powder that takes up space and weight.  Sometimes we would take a sip of the heavily concentrated Infinit and chase it with a gulp of water to get the desired proportions.  We also didn’t have to spend precious seconds adding new powder to the bottle, then water, and then mixing it up.  Obviously it would be nice to have an unending supply of water bottles with just powder in them that we could rotate in, fill with water and keep going, but that is not reality in adventure racing or any other truly rigorous endurance activity.  This worked as well for us as we could have hoped for, with minimum weight to carry around. 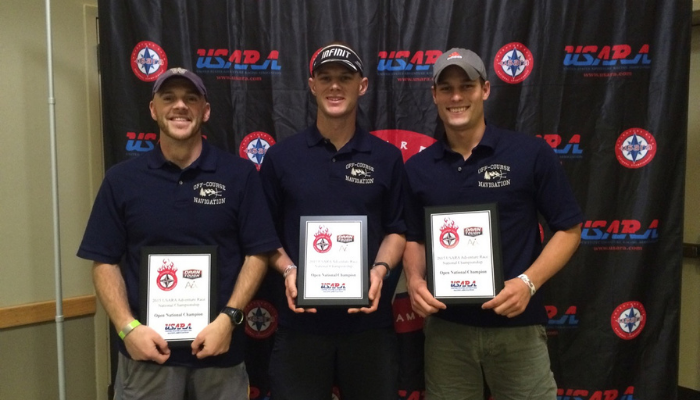 Adventure racing is also a sport of innumerable details, many of which are forgotten soon after a race of this length and intensity is over.  What you are left with are snapshots of events that were significant to the team or the individual, with many shared memories, but also a number that do not overlap.  In a way, recounting the race for someone is like reminiscing with old high school friends or military buddies or college friends.  What comes to one person’s mind immediately is seldom the same as the rest, but when talked about as a group, having your memory jogged can be a little like opening presents on Christmas morning!  That being said, when asked to review a product or a piece of gear, different things come to mind for each of us.

Jim, who has raced a lot over the past decade, has tried dozens of different nutrition products over his years of racing.  He had never used Infinit before and was understandably a little worried about using a new product at a race.  Thankfully, he was very pleased with how well it performed, how it did not disturb his stomach (as so many such drinks tend to do) and how good it tasted, even after 23 hours.  All in all, the team has unanimously agreed that Infinit will be our nutrition source of choice moving forward and we are very grateful not only to have found them, but to have their support as well.  Thank you Infinit!

Posted in News, Race Reports and The INFINIT Library